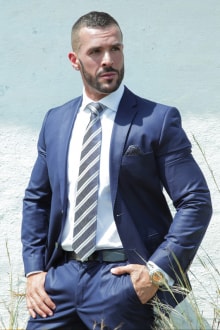 Hailing from the hot and sweaty climate of southern Spain, Denis Vega is the epitome of the tall, dark and handsome cliche. Actually, let us make that - tall, dark and hot as hell because Denis is 185 cm of pure hot-blooded muscle and wherever he goes he’s sure to turn heads. The man oozes sex from every pore. So it may surprise you to know that as a young (innocent) boy, he attended a Catholic convent where he was schooled by nuns, and almost ended up being a priest. We can only imagine the scandal he could have caused there, but luckily for us, he chose a different path. And today he’s one of your most requested men on Menatplay and featured in some of your favorite scenes. Among them “The Upper Hand” which has to be one of our all-time favorites scenes. (If you haven’t seen it yet, stop whatever you’re doing and watch it now!) Hands down one of the hottest threesomes you’ll see, so no wonder it’s one of your highest voted scenes ever on Menatplay. Other ‘must-watch' Denis Vega scenes include the 5-Man group scene “The Line Up” and his personal favorite “Hey Mr. DJ”, which is 24 minutes of pure, unadulterated sexual chemistry. And with a partner like blond, blue-eyed Logan Moore it’s no wonder you gave it 5 stars.